Quest for the lost tribe of Cummeragh

Quest for the lost tribe of Cummeragh

High up in the hills of the Cummeragh mountains in County Waterford, it is said that there are giant char, of a size known no where else in this fair isle. The legend goes, well in fact the account goes, “In these mountains are four considerable loughs two of which are called by the 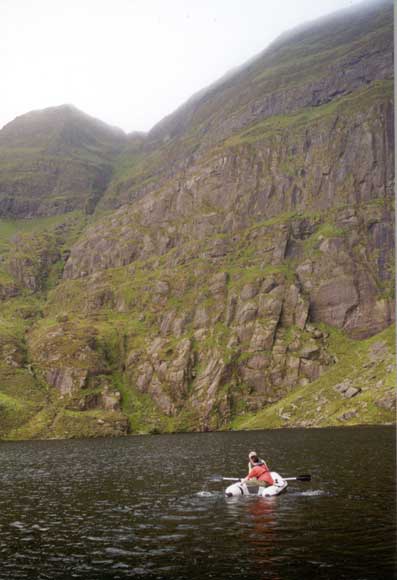 Irish Cummeloughs and the other two Stillogues. The largest of which contains about five or six acres. In these loughs are several kinds of trout; a species of fish called charrs about two feet long, the male grey and the female yellow bellied; when boiled the flesh of these charrs is red and curdy as a salmon and eats more delicious than any trout”. This account was written over two hundred years ago, by a Mr. Charles Smith in his book, The ancient and present state of the county and city of Waterford in 1774.

The Cummeloughs are not listed in the modern Ordnance although there are a number lakes with a similar name and there are reports of a strange fish being caught occasionally.

The more adventurous of the Irish Char Conservation Group decided to explore the uncharted territory of the Cummeragh mountain lakes and try to discover their ancient treasure.

To this end a large expedition, in collaboration with the Southern Regional Fisheries Board and the Three Rivers Project set off up to the most likely contender, Lough Coumshingaun. This lake is one of Irelands if not Europe’s most spectacular corrie lake and is a gem to behold. The lake was sampled with special Arctic char gill nets specifically imported from Sweden. Heavy hydroaccoustic equipment was also used to try and locate the char. To the surprise of the scientists the lake turned out to be 54m and very cold 6oC (in September) at its deepest point; an ideal habitat for char. However no sign of the char. Although there were plenty of small brown trout. Laboratory analysis show that the genetics of these trout are very unique and may hold important information on the colonisation of Ireland by fish after the last ice age. Indeed they may have survived from a prehistoric time before the ice age of 13,000 years ago. 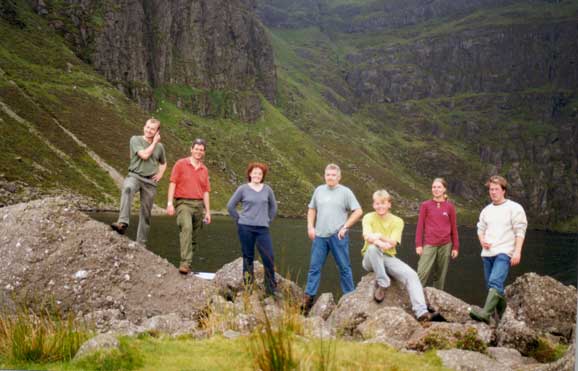 Back to the quest for char. Last week end the ICCG and the Southern Regional Fisheries Board surveyed a smaller lake, Coumfea, in their quest to find the lost population. Again the survey blanked and together with a negative result from a scientific expedition from University of Galway last year to another lake Coumlocha, this leaves only the Skillogues as possible contenders and should be the next port of call to solve one of the strangest mysteries of the Cummeragh lakes.

Could it be that that Charles Smith was mistaken in 1772. However his description is very accurate and such hugh char do exist in Sweden and Russia, where they are cannibals or feed on other fish species. Or perhaps these unique populations are now extinct like so many of our native char populations. The ICCG estimates that up to 40% of Irish populations, including all populations east of the River Shannon, are now extinct. However unlike other char lakes where the char have disappeared, these Cummeragh lakes do not suffer from pollution, acidification or coarse fish introductions associated with other char extinctions in Ireland.

So the search continues and fingers crossed these elusive species will be discovered and hopefully the lakes afforded special protection to protect them.

Although the ancient char have not yet been found, important information on the native brown trout has been demonstrated. These trout are genetically unique, posses genes not found in other Irish trout populations and in the words of the geneticist Niall McKeown of Queens University Belfast, should be conserved as a unique genetic source. This is important information when assessing the heritage value of the Cummeragh area which surely must now recognise the uniqueness of the fish as well as the spectacular landscape, flora and “land” fauna.

Meanwhile the search for Irelands most southeasterly char populations continues. 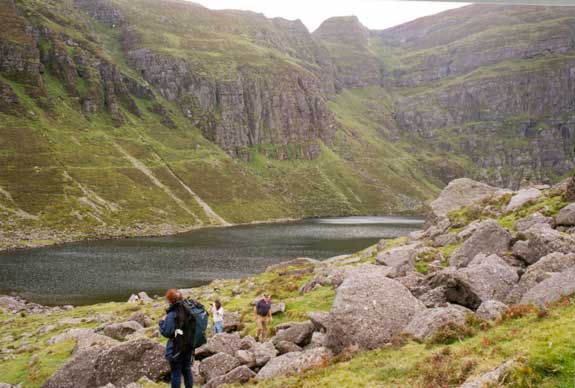